Our 11+ hr KLM flight down to Cape Town was great. Lots of old Johnny Cash on the in-flight entertainment system (Get Rhythm, Jackson type of stuff). We snagged one of the only rows with only two seats on the plane - in the last row of seats in the tail of the plane. Great seats, not noisy, pretty roomy and we got served food/drinks first every time. Airplane food was actually pretty good and the packaging looked like the love child of an iPod and any piece of IKEA furniture you can imagine. Human entertainment was provided in the form of the McStandersens. A young couple who stood making out in the aisle for at least 5 hrs of the flight.

Landed early at Cape Town INTL airport - passed through customs and got our bags in a jiffy. Really clean airport and very pleasant and efficient staff.

Neil - our 'backpacker bus' driver drove us into Cape Town proper to where we are staying in the Green Point area. We grabbed our bags and then proceeded to have a conversation with two guys standing outside our hotel. Turns out one of them was running it. He was smashed and kept repeating the same phrases - which sounded a lot like 'I've locked myself out of the hotel and hope the intern gets here soon'. That, in fact, turned out to be what he was saying. Sooner rather than later the intern showed up and we got keys to our room (as he was a bit too inebriated to work the credit card machine). Rooms are pretty nice. Price is right. Location is great. Staff iffy at this point - but reserving judgement until we've been here a few more days.

On Thursday (today) we walked to the Victoria & Albert Waterfront, took the red hop-on/hop-off bus all around Cape Town proper. We jumped off at Table Mountain - but as the cable car was undergoing maintenance, had been down all morning and it was a bit hot up there we decided to save it for another day and bus'ed it to Camp's Bay Beach where we had a delicious lunch at 'Bungalow' and then strolled along the beach and went 1/4 of the way into the bone chillingly cold water. We made it back to the waterfront in the evening, hit the local grocery store 'pick n pay', and are now checking emails at the local Internet Cafe. I'm off to find some aloe as I managed to wear sunscreen and not get burned anywhere except my hands - where it now looks as if I'm wearing a pair of red mittens.

Fun times here - tomorrow is the 'Peninsula' full day tour where we'll get to see the Cape of Good Hope! 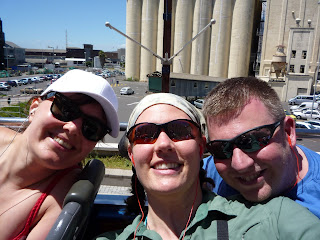 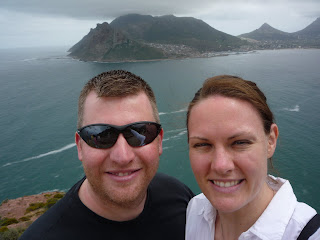 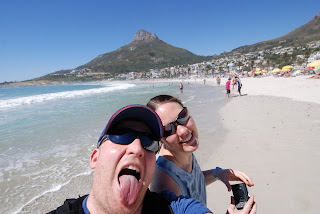 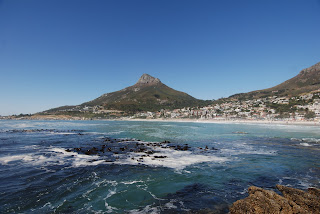 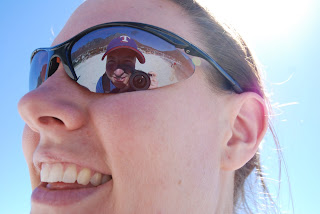 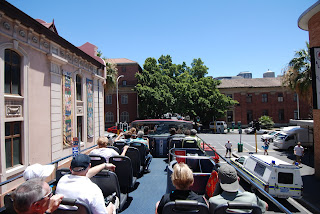