Bye Dublin - we will miss you!

Emily and I finished packing up and shipping all of our belongings back to the states on Sunday. We then spent Monday cleaning up the apartment and running errands for our upcoming trip. Tuesday morning we flew out to London (where we briefly toured the LHR airport) and then on to Amsterdam. Our flight to Amsterdam was on KLM - which was fantastic - lots of leg room (thanks people of the Netherlands for all being so very tall) and the crew was the nicest, happiest airline crew I've ever seen (they made the fine people at SouthWest airlines looks like grumps). After our :45min flight we checked into the 'Citizen M' walking distance from AMS airport. It's almost entirely wired hotel - you can barely turn on a light with a switch. We checked in at one of the many self-service kiosks in the lobby (which was 10% lobby, 60% bar and 30% reading or 'hip' hang out areas). In the room itself - everything is controlled by the remote controlled 'moodpad' and you can draw the blinds, change the music and alter the lighting in the shower and toilet glass pods. Interesting for a night - would get to me after too many nights. On Wed we will fly out to Cape Town. 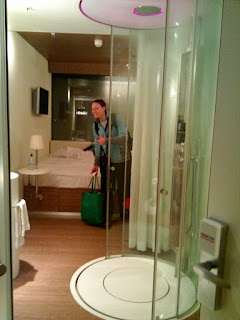